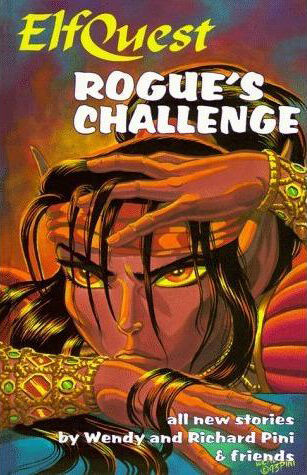 Rayek has lost much of his magic ability after letting the Palace of the High Ones come and go unmerged. Try as he might, he cannot even levitate himself anymore, let alone the entire castle. Venka and Zhantee visit him to persuade him to reemerge above water, as most of the Wolfriders are out on a hunting trip. He agrees to go hunting with them, and they soon come upon a buck. Rayek's hunting skills as well as physical stamina have fallen by the wayside after his dependence on magic for so many years, but he tries to keep up. Eventually he faces the wounded animal in a one on one battle, while the remaining Wolfriders look on from the shadows. He manages to kill the buck, and howls in victory; but upon trying to share the meat with the Wolfriders, Nightfall refuses his kill citing what he did to Cutter. Years later, Rayek's renewed magic and small trust gained back allow him to take some Wolfriders to Sorrow's End for a visit, and return them safely. He then goes to the Scroll of Colors to tell a tale about the days of the High Ones.

The High Ones are still in their former alien-esque forms, and retell of their days of travel and shapeshifting. Timmain speaks of them transporting the last life of their planet onto their ship, as well as the rebellion of the then-called "Burrowers". The slaughtering of the High Ones is told once again, but now the story continues with Timmain's decision to leave the group for help. Haken's reaction to the accident is more vicious than the rest, and his similarities with Rayek show through. All the while, Timmain is learning to become one with nature, to change into animals that can hunt better than her elf form. Haken plans revenge against the humans, and revisits his slain brothers and sisters in the halls of the Palace. He kills the brutish humans without mercy, until a pack of wolves attacks him outside.

The wolves attack Haken as he attacks the humans, but one wolf in particular stands out. Timmain shapeshifts again and reminds everyone everyone of how wrong the killing is, regardless of who is dying. Eventually, she calls off the wolves, and they leave. Timmain is crowned the leader of the elven tribe, and teaches them to howl, dance, and use their weakened magic in this world. Meanwhile, Haken plots further revenge, and teaches the remaining humans to bow down to him, and kill any wolves they see. In an attempt to heal Kaslen, the group tries to take back the Palace, but they are confronted by Haken and his human protectors. After some scuffle, the group is forced to leave again, on the backs of their new wolf brethren. The group moves on, and start to truly survive in the world, all the while Timmain is becoming more wolf and less elf every day. Her story ends with her bringing her child, Timmorn Yellow Eyes, to the group, thus cementing their bond with the wolves. Rayek finishes the tale, and continues onto his next, the real origin of his unending love for Leetah.

Rayek is restless since birth, and he cannot stand the thought of tending gardens and eating roots all his life. At an early age he ventures out and teaches himself to hunt small game, but slowly he learns to make traps, and use his magical glare to his advantage. Unfortunately, a pack of jackals attacks and injures him while he's out hunting one night, provoking Rayek to seek a form of revenge. Savah learns of his powers and invites him to be her pupil, and he eventually learns how to levitate small objects with ease. Soon after, Toorah and Anatim recognize, and Leetah is born. Rayek is jealous of the attention she recieves at first, but eventually comes to adore her just like everyone else. One day while Leetah dances playfully, she hugs Rayek and heals his jackal-gored arm, allowing him to hunt again. And while she lives an easy life, there is one thing that Leetah cannot seem to shake. The Zwoot stampede and the solar eclipse instill in her a fear of things that she has no control over, and it is this fear that causes her to hold back against Rayek's desire for her. She will not belong to anyone unless she decides it, and thus begings the game of cat and mouse. In an attempt to impress her, Rayek leaves Sorrow's End to retrieve Zwoots, tamed and ready to be used by the villagers. But at his return, one of the Zwoots breaks free of his spell, and kills Leetah's friend Thiro. Leetah sees this as an act she should have been prepared for, and decides to test her powers herself. She steals Rayek's dagger and stabs herself, learning how to truly fight against death. The story ends and Rayek ponders over whether his feuding with Cutter will ever end, and whether or not Cutter still thinks of the Bridge of Destiny.

Cutter dreams a nightmare where he is back atop the Bridge of Destiny, but this time it is Leetah who stands across the bridge, waiting for him to come to her. Rayek mocks him from high in the air, flying by and taking Leetah with him, as Cutter falls from the bridge. The Chieftan awakes from the dream, and snarls to Skywise over his lingering resentment towards Rayek. Meanwhile, the magical elf sits in the throne room of the Palace, recieving a message from Suntop about a distant land. Rayek knows that he will never be trusted again at the rate of things, and asks Venka to give Cutter a message, a challenge. Above ground the council of elders talks in hushed voices over the current state of the tribe, and worry about the apparent stagnation. Their conversation is interrupted as Cutter's furious response to Rayek's challenge echoes off the mountainside. Picknose is all too happy to see a fight, and the elves in their entirety are welcomed to an underground troll arena. The fight begins as Cutter throws the first punch, but Rayek doesn't stay down for long. The two knock each other about the arena, while the trolls and Wolfriders watch on. On and on the fight goes, but slowly it turns in Cutter's favor. As he holds Rayek down across a pit of burning coals, he sends to Rayek the innermost pain of losing his family. Rayek cries out against the images and Cutter throws a rib-cracking punch. The two battle on, until they are both weary and broken. Finally, Cutter calls for the fight to be over, seeing that Rayek only wanted to fight in the first place for Cutter's own sake, not his.

How Shall I Keep From Singing? Pt. 1 and 2: Words by Sarah Byam, Pencils by Paul Abrams, Inks by Charles Barnett, Colors by Paty, Editing by Wendy Pini

Community content is available under CC-BY-SA unless otherwise noted.
Advertisement